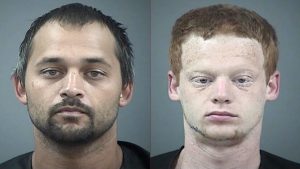 Two South Carolina men are behind bars charged with going on a crime spree that ran from Toccoa-Stephens County to Greenville.

According to a report on WSPA-TV in Greenville, the pair were arrested Thursday in Clemson after leading police on a chase in a stolen vehicle.

Clemson Police say the vehicle had been reported stolen from Greenville when it was spotted late Thursday night by officers speeding in downtown Clemson.

When officers tried to stop the car, the driver sped off and a chase ensued to the end of a dead-end street.

Police say two men got out of the car and ran.  One of the suspects was caught while trying to swim away in Lake Hartwell.

The second suspect was arrested the next morning after police found him sleeping on the balcony of a local business with a loaded gun. Police also found stolen ID cards belonging to one of the suspects.

Locklear is charged with Public Disorderly Conduct, Unlawful Carrying of a Pistol, three counts of Receiving Stolen Goods, Breaking Into a Motor Vehicle, and Petit Larceny by Clemson Police.

Wardlaw is charged with Grand Larceny, Driving Without a License, Reckless Driving, and Failure to Stop for a Blue Light by Clemson Police.

Wardlaw also has charges pending from Toccoa and Greenville County.

Both Locklear and Wardlaw are being held in the Clemson City Jail.