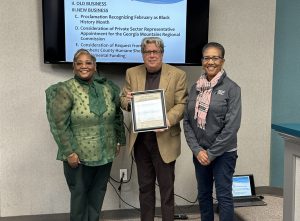 “Whereas, In 1926 Dr. Carter G. Woodson initiated the celebration of “Negro History Week” during the week that corresponds with the birthdays of Black abolitionist Frederick Douglass and President Abraham Lincoln to provide Black teachers in segregated colored schools with the resources to celebrate their cultural heritage and uplift their students.

“Whereas, in 1976, in recognition of the nation’s bicentennial year, the celebration was expanded from “Negro History Week” to become Black History Month including the entire month of February.

“Whereas, each year since 1976 the Black History Month celebration has garnered support throughout the nation as U.S. Presidents annually issue a White House proclamation and people of all ethnic and social backgrounds study and learn more about the African American experience and contributions.

“Whereas, the Appalachian Regional Commission celebrates Black History Month by honoring Dr. Carter G. Woodson as a native son of the region. and recognizes that Black Appalachians have made countless contributions to our shared communities.

“Whereas, the observance of Black History Month calls our attention to the continued need to build a society that lives up to its democratic ideals.

“Therefore, the Toccoa City Commission proclaim February 2023 Black History Month in the City of Toccoa, Georgia, and urge all citizens to commit to becoming an inclusive community in which everyone is valued and respected,” Austin said.

A motion approving the proclamation was made by Commissioner Terry Carter with Commissioner Evan Hellenga seconding the motion.

The motion was approved unanimously.