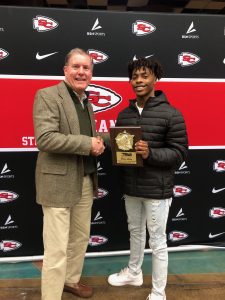 Special recognition was also given to those who were named All-State by the A-J-C or Recruit Georgia.

WNEG presented our Player of the Year Award to senior Cam Lacy, who led the team in receiving, kickoff returns, punt returns, and also played defensive back.

A new award named in memory of Keaton Thompson was presented to Aaron Maxwell for his “effort, attitude, and toughness.”

Stephens County Head Football Coach Wesley Tankersley said the evening was a time to honor last year’s team and to challenge the players coming back for this year’s team.

The Indians finished the season with a record of 9-3 losing in the second round of the state playoffs to the eventual champ Sandy Creek.

They were Region 8-AAA champs, the 15th region championship in school history, and hosted a 2nd round state playoff game for the first time since 2007.