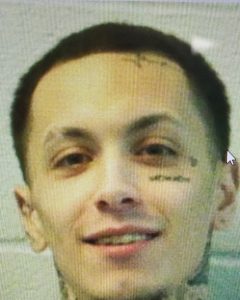 Pictured is Calvin McCoy, the 24-year-old inmate who escaped from the Stephens County Jail, Wednesday morning.

According to Shirley, after searching throughout the day and into the night Wednesday, he believes 24-year-old Calvin McCoy is no longer in the perimeter his office has been searching.

Immediately following the escape, deputies responded to the area of Prather Bridge Road and Camp Mikel Road, where deputies met with a citizen who had reported a citing of the fugitive.

Shirley says the K-9 teams were able to locate a track that contained footprints. They followed these tracks back and forth along different creek beds in the area.

However, after tracking for most of the day, the K-9 lost the track.

According to the K-9 Handlers, this was likely because the inmate began traveling in the creeks waste deep water.

At that time, deputies began clearing buildings located within and immediately surrounding the perimeter.

Shirley says deputies went late into the evening clearing these one at a time.

Based on all available information from the K-9 teams, aviation, and ground Search deputies, Shirley says it appears the suspect was able to successfully escape the perimeter and is no longer in the area of the search.

Investigators have started a detailed investigation into the suspects history, and at this time, that investigation has revealed that McCoy moved to the area a few years ago; but was originally from Ohio. Based on these out of state ties, the Sheriff’s Office has reached out the US Marshals Fugitive Apprehension Team and are partnering with them to assist with the ongoing search.

As of Thursday morning, the Sheriff’s Office continues to follow up on several promising leads and will continue to aggressively pursue McCoy.

He has neck tattoos and a tattoo on his cheek bone.

If you see anyone matching this description please call 911 immediately.

WNEG News will continue to follow this story and bring you additional details as they become available.