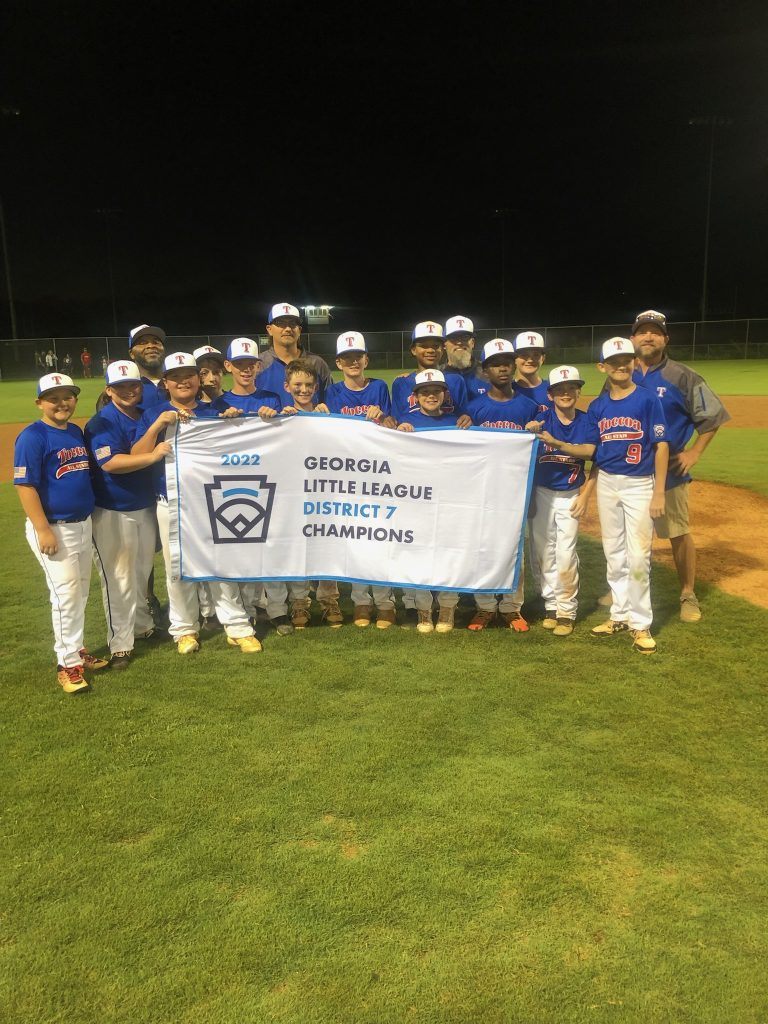 The Toccoa Little League All-Stars overcame an early deficit and defeated Hart County 14-9 to win the District 7 12U Championship Monday night in Hartwell.

Toccoa trailed 5-0 after two innings, but scored the next 14 runs of the game with 7 runs in each of the 3rd and 4th innings.

Down 5-0, Seth Stonecypher led off the top of the 3rd with a single, Lincoln Hicks and Isiah Patterson walked, Duke Collins singled scoring Stonecypher, and Caden Hamilton doubled home Hicks, Patterson, and Collins to pull Toccoa to within one at 5-4. After a Landry Williams single, Dylan Elrod doubled home both Hamilton and Williams to give Toccoa the lead. Stonecypher’s fielders choice scored Elrod to make the score 7-5.

In the 4th, Collins walked, went to 3rd on a throwing error, and scored on Brant Smith’s single. Toccoa then added on with two outs. Thompson Bullard and Levi Brooks walked, Stonecypher had an infield single, Hicks singled home Bullard, Patterson singled home Brooks and Stonecypher, and Collins tripled to score Hicks and Patterson.

Williams picked up the win on the mound and Smith worked 2 and 2/3 innings of relief.

Toccoa will now head to the state tournament in Cartersville and will face Martinez-Evans on Saturday at 1 P.M.

in other news involving the Toccoa Little League, the Toccoa 10U all-stars were eliminated falling to Smyrna Blue 16-1. Toccoa is also hosting the Senior League state championship at Doyle Street Park. Jones County defeated Oconee County in extra innings on Monday night and will now face Rockmart in the state final. Rockmart needs to win one of two to be crowned champion.