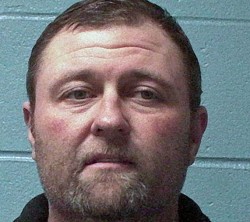 A Franklin County man, convicted of murdering his girlfriend, loses his appeal to the State Supreme Court.

Northern Judicial Circuit District Attorney Parks White announced late Tuesday that the Supreme Court of Georgia has affirmed the murder conviction of Brent Shubert, and his sentence of Life without the Possibility of Parole.

In December 2015, Shubert was found guilty of malice murder, felony murder, and concealing the death of another in the 2013 strangulation death of his then live-in girlfriend, 33-year old Bonnie Ann Cooner.,

Her body was found two weeks later down an abandoned well near the home they shared.

In 2015, Shubert lost his appeal for a new trial and a new court-appointed attorney.

Then in 2017, Shubert filed an appeal with the Georgia Supreme Court.

“Shubert showed no remorse for the murder of Cooner and while in jail awaiting trial, actively sought to escape, and to prevent a key witness from testifying against him by offering money to two fellow inmates to kill the witness,” White said.

White added that after his conviction, Shubert sent mail to his ex-wife assuring her that he would be released soon.

“The opinion of the Supreme Court of Georgia ensures that Shubert will die in prison,” he said. “This conviction and sentence is a testament to the hard work of the Franklin County Sheriff’s Office working in tandem with the Georgia Bureau of Investigation.”

White thanked the efforts of the Office of the Attorney General and the District Attorney’s Office of Augusta for their work on the appeal.