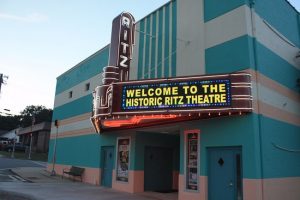 Friends of the Ritz Theatre has recently received their tax-exempt status from the Internal Revenue Service.

Friends of the Ritz President Keith Kozicki tells WNEG News the tax exempt status has some very important implications for the group.

“The IRS designation gives us a tax-free status meaning we are listed as a charity,” Kozicki said. “It also gives people who donate to us the ability to deduct their donation on their taxes, but the real advantage is this allows us to begin fund raising to benefit the Ritz Theatre and the patrons of the Ritz and the citizens of Toccoa.”

Additionally, the group can now move forward with their first fundraiser, which is slated for October and commemorates the Ritz Theatre’s 80th anniversary.

Kozicki said the public is invited to find out more about the Ritz anniversary funder.

“We will be holding our quarterly public board meeting on Saturday, September 14th at 10a inside the Ritz Theatre,” he said. “At that time we will be going over the fund raising efforts that we’ve already kicked off. We will also be finalizing plans for the first official fundraiser, which takes place October 18th.”

Kozicki said the 80 for 80 Celebration will include a screening of the Wizard of Oz, which came out the same year the Ritz Theatre opened. It will also include a birthday cake and an introduction to the movie by University of Georgia Professor Richard Neuport.

Neuport is the coordinator of UGA’s Film Studies Program and on the Board of Directors for the non-profit Ciné movie theatre.

Kozicki said anyone interested in volunteering or getting more information about the Friends of the Ritz is invited to attend their next quarterly meeting.

Again, the meeting takes place Saturday, September 14th at 10 a in the Historic Ritz Theatre.