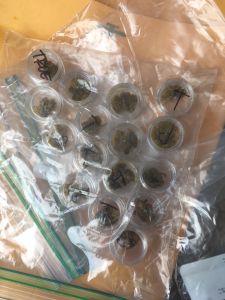 Butane Honey Oil has a street value of $150 per gram

In Franklin County, the star of the YouTube channel, “FPS Russia” is back in the news again, this time arrested on felony drug charges.

According to the Franklin County Sheriff’s office and agents with the Appalachian Regional Drug Enforcement Office, Myers was arrested after he allegedly received a substance through the U.S. mail known as Butane honey oil.

Butane honey oil is a marijuana concentrate and is a highly potent concentrated THC (Tetra-hydro-cannabin-ol) that is most similar in appearance to honey or butter.

Marijuana and marijuana concentrates are illegal in Georgia.
After Myers arrest, Franklin County authorities and agents with the Bureau of Alcohol Tobacco and Firearms executed a search warrant at his home on Royston Road in Carnesville.
There, according to a GBI press release, they found and seized numerous weapons, drug paraphernalia, and a quantity of butane honey oil.
Myers was charged with felony possession of a schedule one substance with the intent to distribute and possession of drug related objects.
Myers was transported to the Franklin County Detention Center and is being held on a $10,000 bond.
In 2013, Myers and his YouTube channel were the focus of a local, state and federal investigation when his partner, Keith Ratliff, was found shot to death inside the FPS office in Carnesville in January 2013.
No arrest has ever been made in that homicide.
However, the GBI continues to investigate and the case is still open.