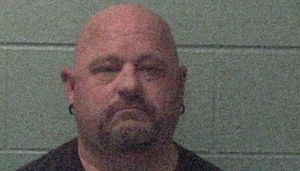 A former South Carolina police chief is behind bars charged with armed robbery of a bank after being captured in Franklin County.

“At around 12:30 Sunday afternoon, Franklin County dispatch received a lookout for a silver Lincoln SUV, driven by Inman, that was headed southbound from South Carolina,” Thomas said. “Inman was wanted for the alleged armed robbery of a bank in Simpsonville, SC.”

Thomas said an off-duty police officer in South Carolina reportedly spotted the vehicle and was following it.

“Franklin County Sheriff’s deputies spotted Inman’s vehicle on I-85 southbound and conducted a felony traffic stop at mile marker 164 near Carnesville,” Thomas explained. “Deputies say at the time of his traffic stop, Inman produced a Georgia driver’s license with a Calhoun, Georgia address.”

Inman was arrested and taken to the Franklin County Detention Center where Thomas said he voluntarily signed extradition papers.

Inman had an extradition hearing in Franklin County Magistrate Court Monday and is expected to be returned to South Carolina this week.