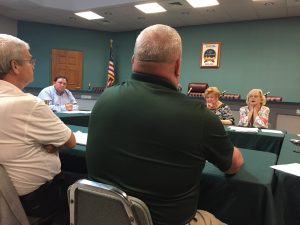 More discussions are planned between Toccoa City and Stephens County Boards of Commission on exactly how much revenue the City will get in the next Special Purpose Local Option Sales Tax.

City officials have already met once with the County Board of Commissioners to make their case for the $9-million, which is $3-million more than they received in the current SPLOST.

The extra funding is needed according to City Manager Billy Morse to pay for a $5-million water plant upgrade, $2-million for roads and bridges, and $2-million for a fire truck, patrol cars, and other equipment.

However, the County is not budging from their offer of $6-million in SPLOST revenue for the City, and Morse said Tuesday the City is still asking for the increase.

“Our request is still for $9-million,” he said. “We have three projects that need to be funded and they’re of countywide benefit. So, we’re going to talk about, but I guess that’s the negotiating process that we will work through to get where we need to be.”

At the intergovernmental SPLOST work session Monday, County Commissioner Dennis Bell went over some of the cuts the County has made to their SPLOST line item budget.

Among the notable cuts were in Economic Development, which was cut to $2.4 million from an initial proposed $5.4 million.

The County also eliminated any SPLOST 7 revenue going into either the Courthouse or the County Coroner budgets.

Two line items, however, have been increased by the County – Roads, Bridges and Culverts, and the Rec Department.

An extra $200,000 was added to the Rec Department to pay for new kitchen equipment and a new storage building.

And just over $627-thousand dollars was added to the Road Department to re-imburse the County for what they spent on repairing Dix Hill Parkway.

Another intergovernmental SPLOST meeting is set for July 8 after the City’s regular Commission meeting.

County Administrator Phyllis Ayers told the Boards Monday, both the County and municipalities must have their SPLOST numbers nailed down by July 15 and to be ready to adopt the SPLOST 7 resolution by July 23.