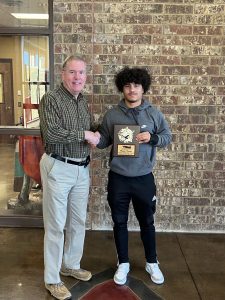 Each player on the varsity and J-V teams was recognized.

Members of the All-Region Team received patches, and all the senior players received a plaque.

Players who made the AJC or the Recruit Georgia All-State Team were given a framed certificate.

WNEG presented our Player of the Year Award to senior Bryson Trimier, who led the team in tackles as a starter at safety.

Trimier was also the team’s punt returner, but also played some at wide receiver, punter, and held on extra points and field goals.

Stephens County Head Football Coach Wesley Tankersley said it was good to give special recognition to all of the players, especially the seniors.

The Stephens County football team finished the season with an 8 & 4 overall record and made it to the second-round of the state playoffs for the first time since 2014.