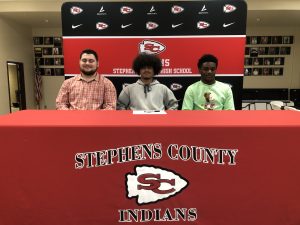 All three players were starters and made All-Region the last two years.  They helped the Indians finish with an 8 & 4 record and an appearance in the 2nd round of the state tournament this past season.

Vadole Fleming, an outside linebacker and son of Sykieta Trimier, says Pikeville feels like home.

Walker Thomason, an offensive lineman and son of Greg and Sharon Thomason, says all three players visited Pikeville together.

Bryson Trimier, who played safety and was our WNEG Player of the Year, is the son of Valyncia Trimier.  He says he liked the convenience of the small campus.

Another Indian football player has also signed a letter of intent to attend college and play football, but did not have a signing ceremony.

Armand Cunningham, who played outside linebacker, will be attending The University of the Cumberlands in Williamsburg, Kentucky, this fall.